This holiday actually has been celebrated in the US since the 1860s. It started in southern California when Mexican immigrant citizens used the holiday as a way to celebrate their heritage.

This is a fun holiday to celebrate with teens because who doesn’t love Mexican food and drinks? And, what better way to get your teen into the kitchen than food and drink for a party! So, plan a fun party for Cinco de Mayo with teens now! *This post may contain affiliate links.  This means, at no additional cost to you, I will earn a small commission if you click the link and make a purchase. 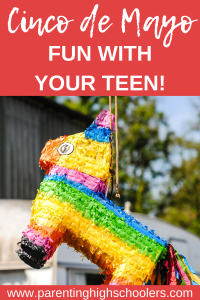 Here are some other holiday posts: 49 Movies for Halloween, Thanksgiving, and Christmas, 25 Movies for Valentine’s Day, Best Graduation Gift Ideas, Budget Friendly Ideas for the Holidays

We use cookies to ensure that we give you the best experience on our website. If you continue to use this site we will assume that you are happy with it.CoolDisclosure